Visualizing The Risk Of Running Out Of Money In Retirement

When you're flying in an airplane, you obviously can't afford to run out of fuel.

And when you plan your retirement, you can't afford to run out of money. 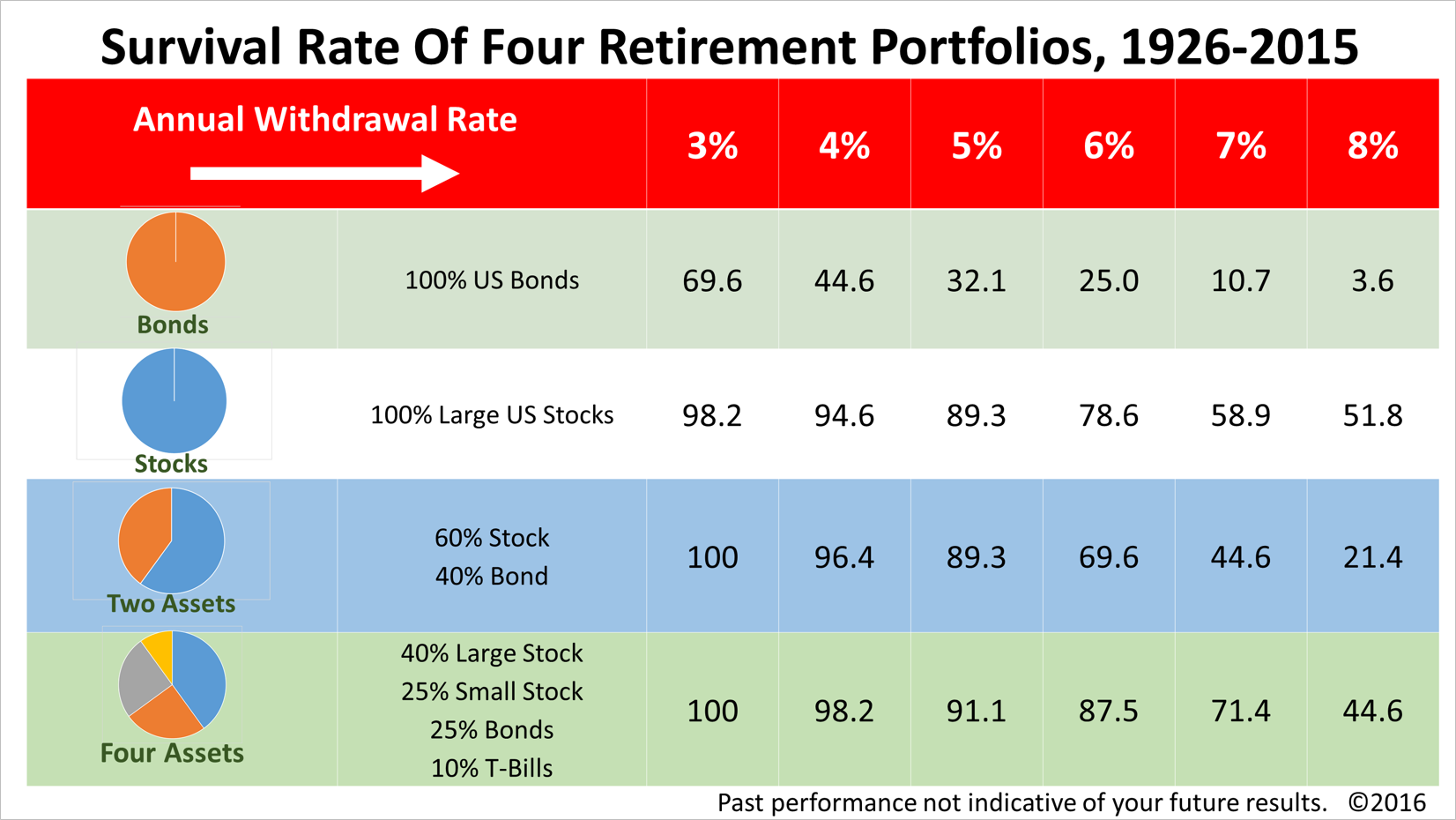 To visualize the risk of running out of money when you're in your 80s and 90s, we're sharing with you here new research we've licensed from Dr. Craig Israelsen, who teaches in the financial planning program at Utah Valley University.

Israelsen back-tested the survival rates of four retirement portfolios based on 90 years of historical data. 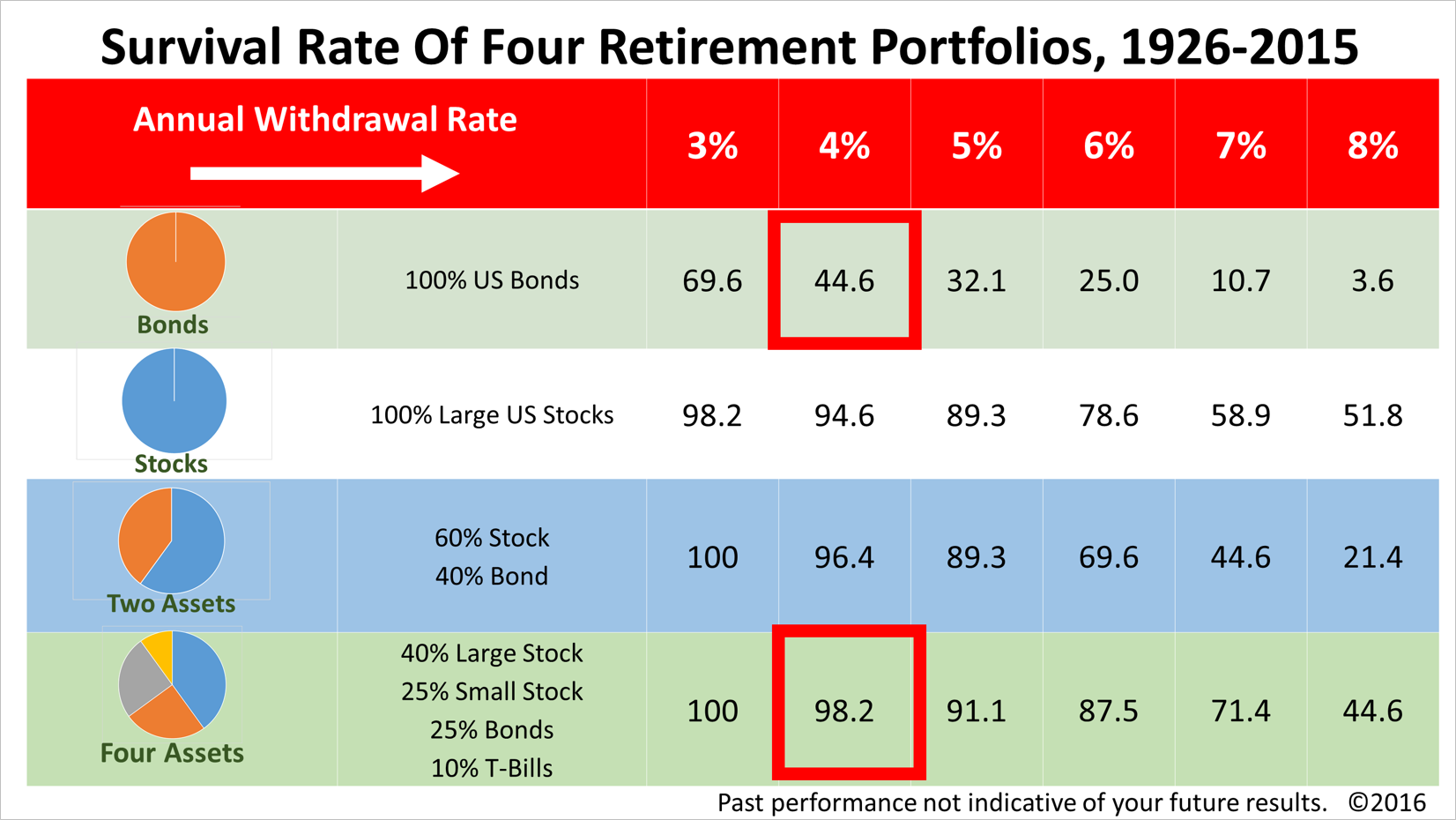 This chart shows that an all-bond retirement portfolio survived at least 35 years only 44.6% of the time, over the past 90 years.


In contrast, a four-asset diversified retirement portfolio lasted at least 35 years 98.2% of the time.


The numbers in the table represent the percentage of time that these four retirement portfolios lasted at least 35 years over the past 90 years – after initial annual withdrawals of 3% to 8%, and 3% cost-of-living adjustments annually to keep up with inflation.


This table is the traditional way to illustrate the survival rates of different portfolios. While the table is very helpful, this is not the only way of visualizing your risk of running out of money in retirement, and it is not the best way.


What this table does NOT show is how long portfolios survived when they didn't last at least 35 years. You have no idea whether a portfolio that failed the 35-year test survived 34, 30, or only 20 years.

That's where this new way of visualizing your retirement portfolio comes in. 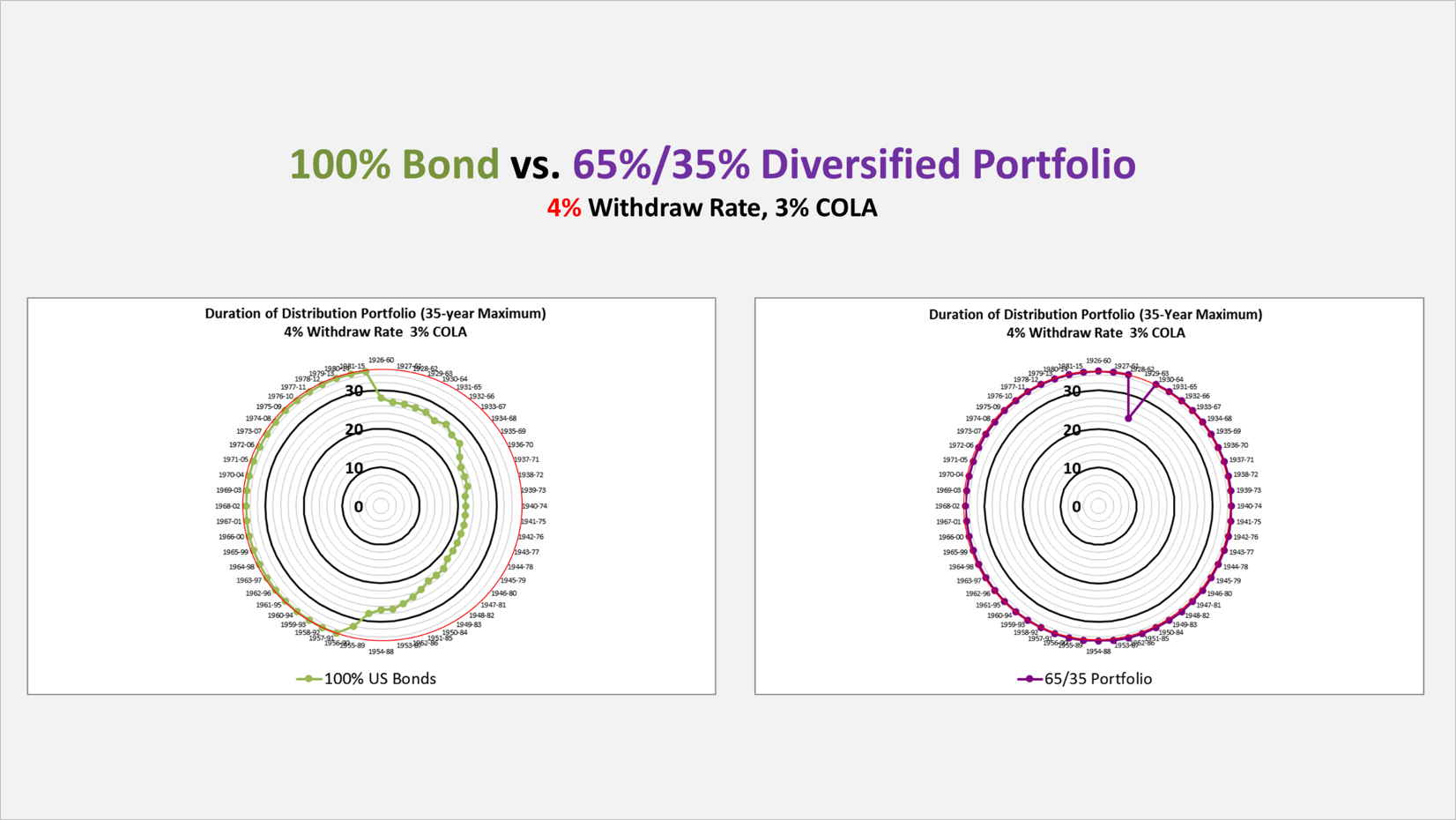 These are radar graphs and they offer a unique way to visualize the survival rate of different retirement investment portfolios over rolling time periods.


Each dot in green in the all-10-Year U.S. Treasury bond portfolio represents one rolling period in the 35-year lifespan of that portfolio.


Each dot in purple represents one rolling period in the 35-year lifespan of that portfolio, which is 65% in the Standard & Poor's 500 index and 35% in 10-year Treasury bonds. The dots on the outer red ring survived 35 years or longer.

As the dots cave in toward the center, it indicates that during that particular 35-year period, the retirement portfolio lasted less than 35 years. The black circles indicate 30-year, 20-year and less survival periods. Look how many of the all-bond portfolios failed to last 35 years.


Not only are they far from the 35-year survival period but many of the 56 rolling periods lasted less than 25 years. Keep in mind, these two graphs assume an initial withdrawal rate of 4% that is adjusted for inflation by 3% annually. 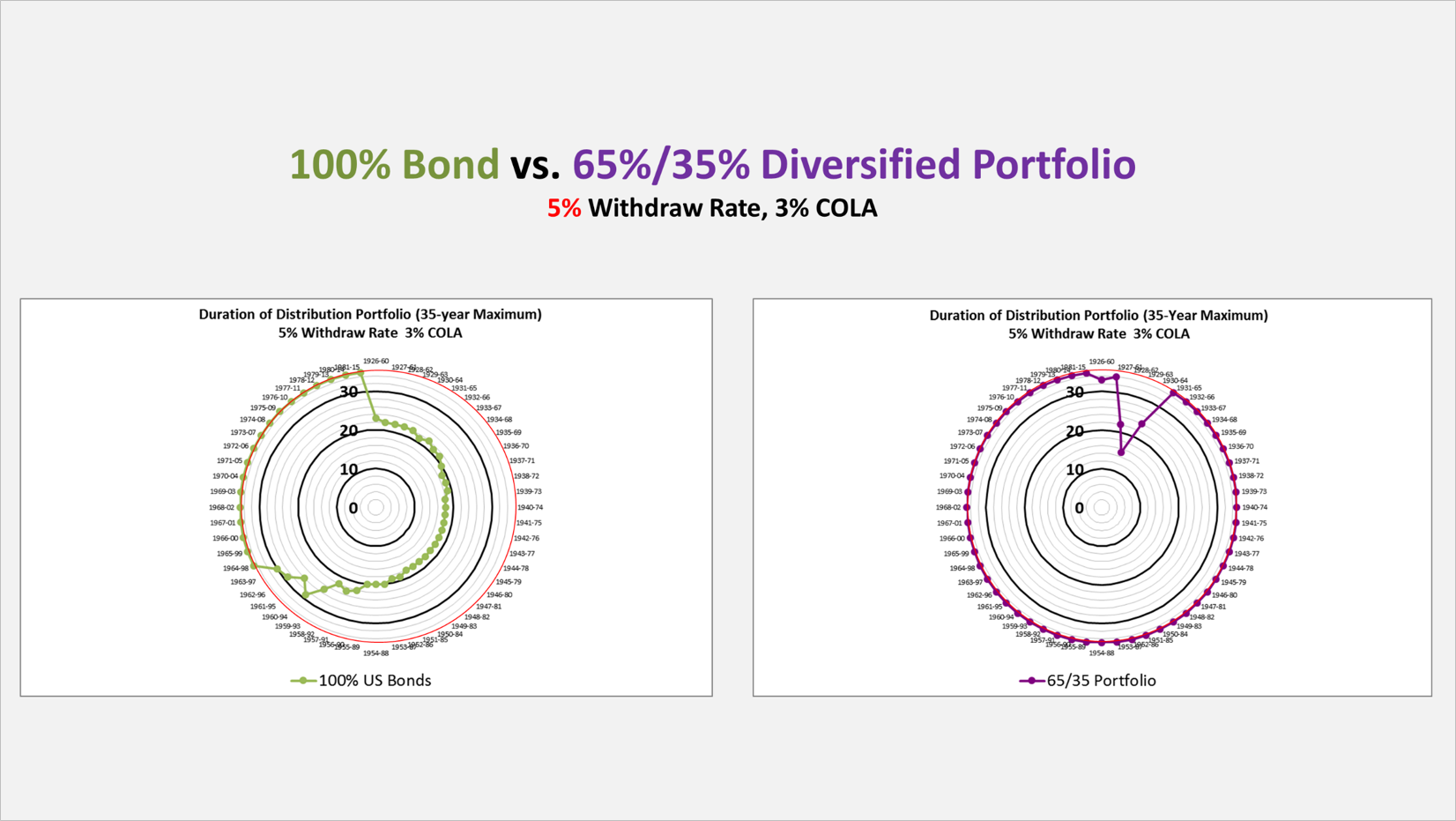 Look at what happens when the withdrawal rate is 5%. There are more green dots in the all-bond portfolio caving in toward the center, indicating the shorter survival periods of these portfolios.

Historically, a diversified 65/35 portfolio has been able to survive for at least 35-years far more often than an all-bond retirement portfolio. 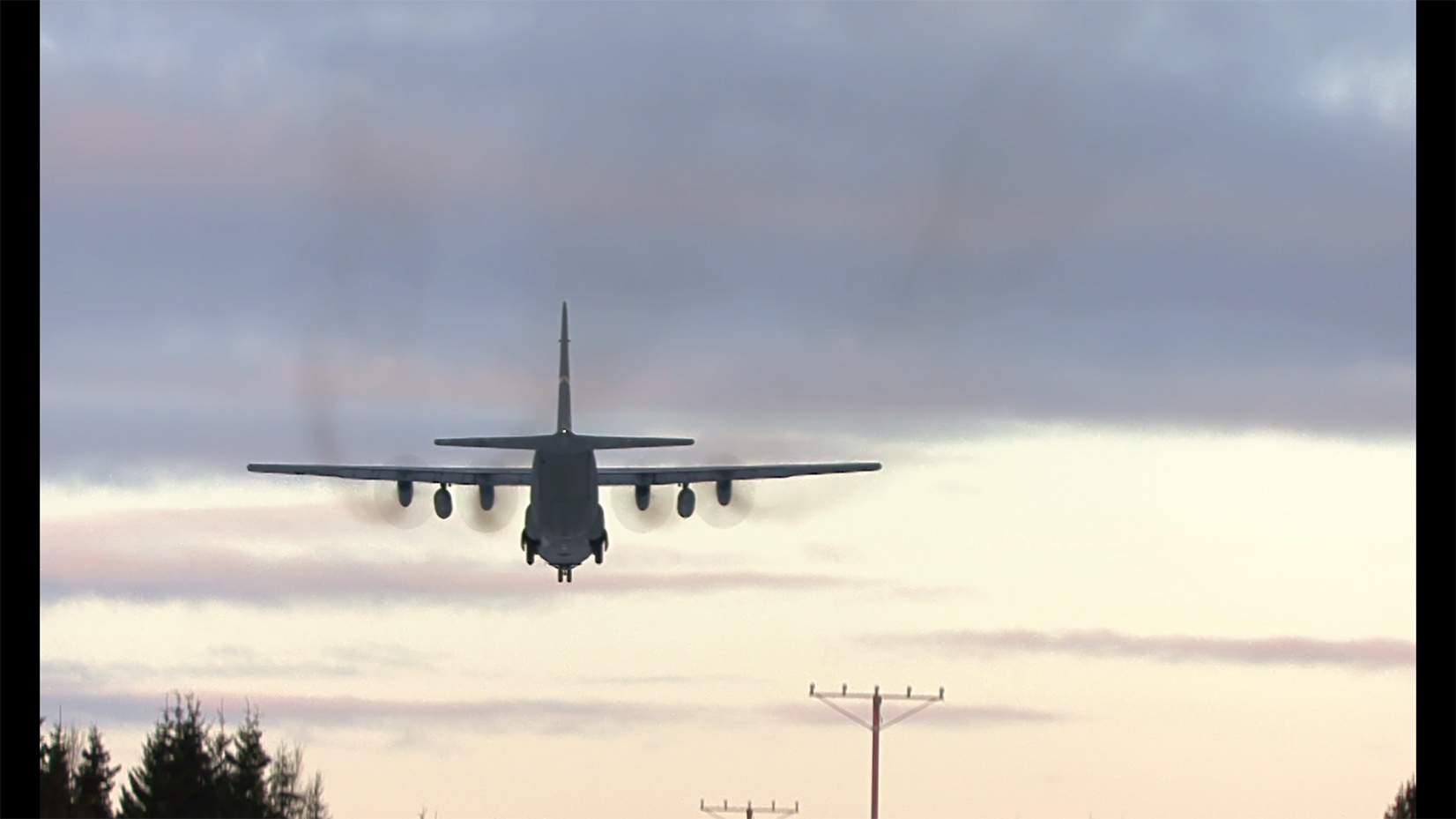 No one can predict the future, and past performance has little to do with your investment results in the future.


But this new data visualization can be helpful in understanding the risk of running out of money in late in life.


If you have any questions or would like to get personal retirement income planning advice, we are here for you any time.