Key Senators Agree On A Road To Cutting Taxes This Year 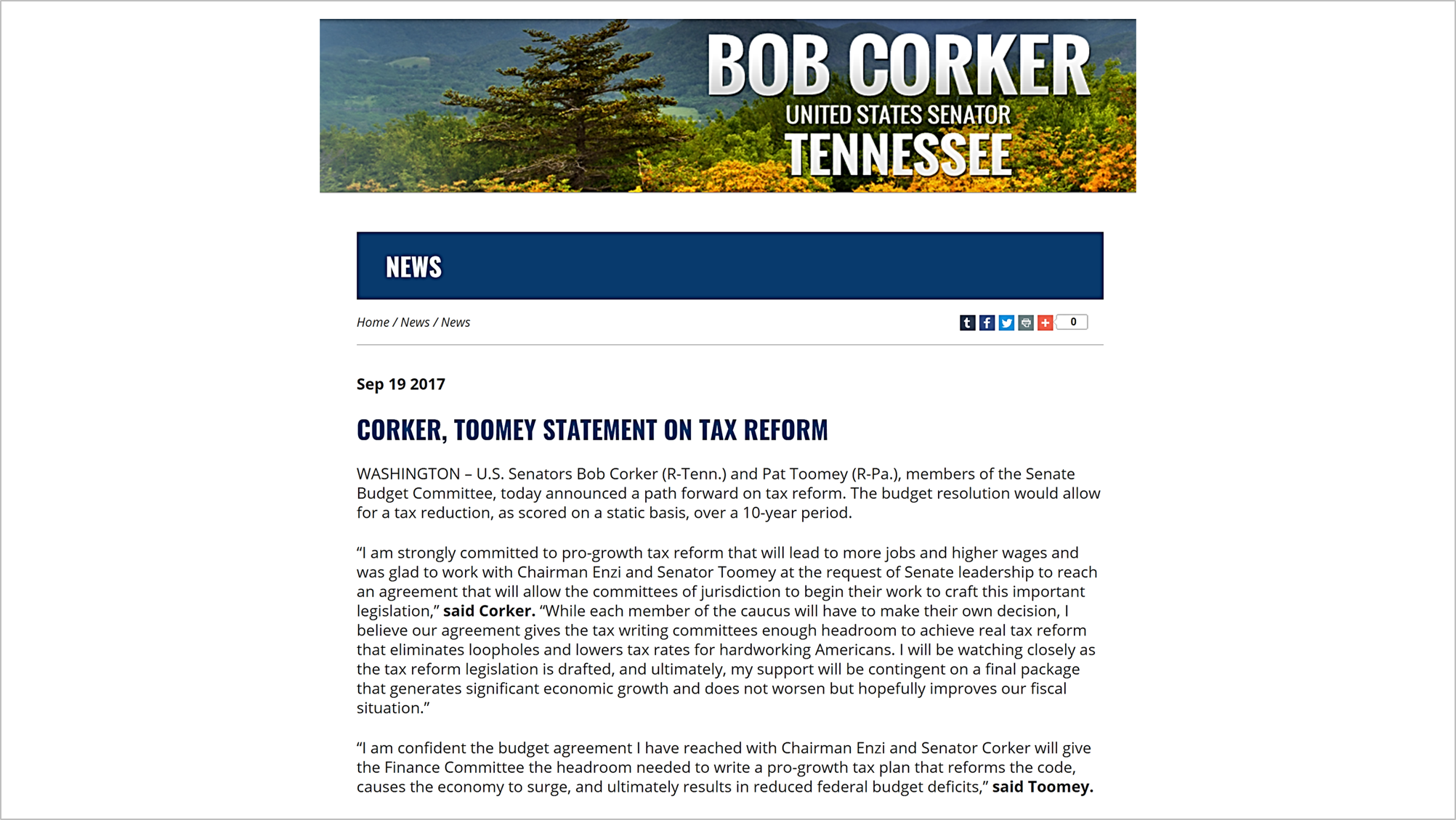 Two key Senate Republicans reached an agreement on the framework of a major tax cut that reportedly will save taxpayers $1.5 trillion over 10 years.


Senators Bob Corker (R-Tenn.) and Pat Toomey (R-Pa.), members of the Senate Budget Committee, released a statement saying they agreed on a path toward tax cuts.


Sen. Toomey has favored tax cuts but Sen. Corker had previously opposed any tax cuts that would add to the country's $20 trillion of debt. In backing off that stance, Sen. Corker opened the path for the Senate to pass a tax-reduction bill, but Senate passage would be only the first step in the legislative process.

To become law, the Senate bill would also need to be ratified by the House of Representatives, where its fate is far from certain. House Majority Leader Kevin McCarthy (R-Cal) and Speaker of the House Paul Ryan (R-Wis.) have previously said they would only approve of revenue-neutral tax cuts that don't add to the nation's debt, casting doubts on the political success of tax cuts that add to the budget deficit. 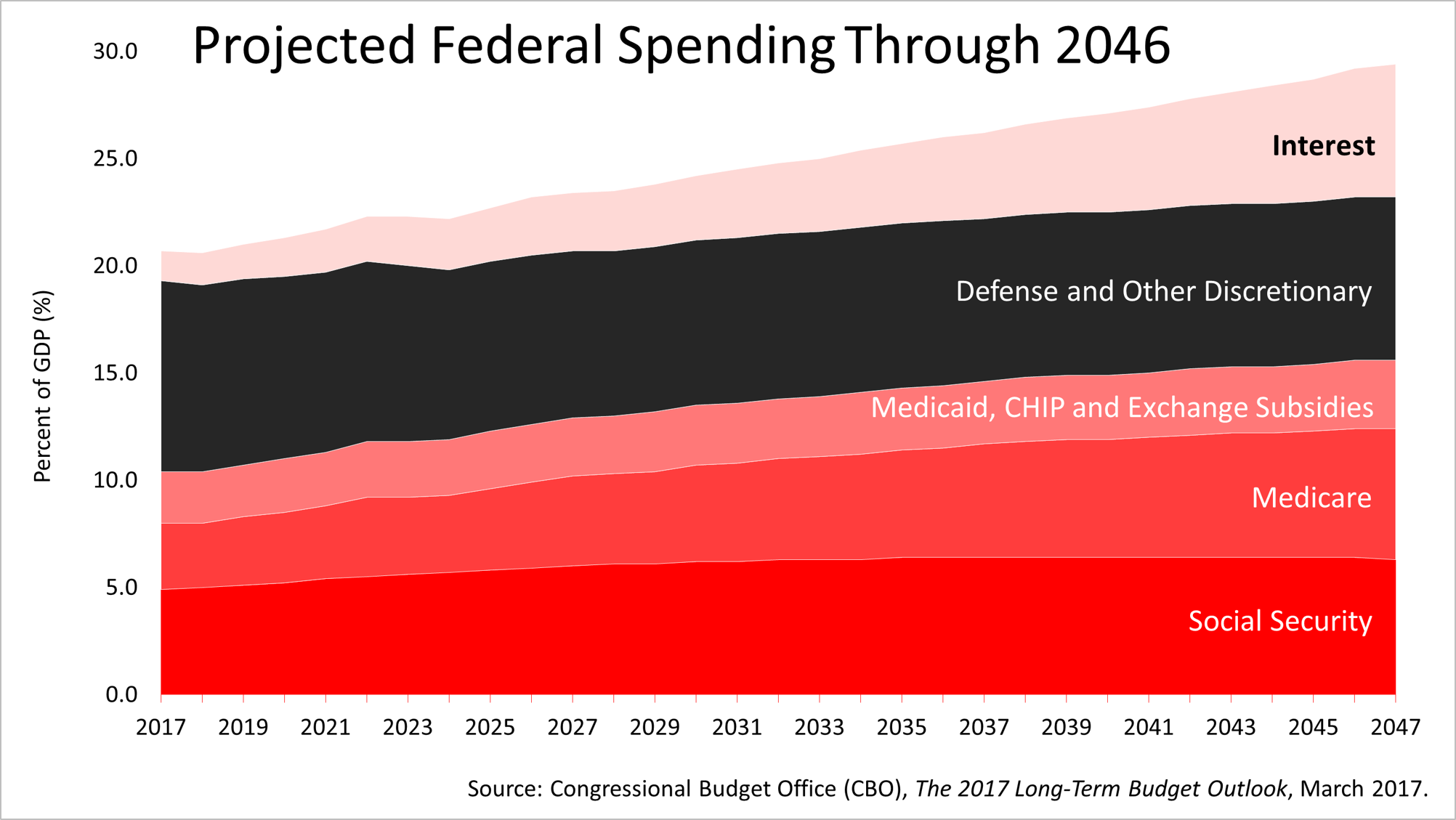 If both the House of the Congress agrees to cut taxes by $1.5 trillion and President Trump, who favors tax cuts, signs it into law, lawmakers would be putting off a day of reckoning with growing interest payments on the U.S. debt.


This chart from the Congressional Budget Office, a non-partisan arm of Congress, projects spending by the U.S through 2046 on major entitlements and defense. Based on current trends, major spending by the U.S. for Social Security, Medicare, Medicaid, defense, and interest on the national debt are fairly stable and rise gently through the mid-2020s and beyond. However, in the mid-2020s, interest owed on these government programs accelerates quickly. If $1.5 trillion were added to the national debt to pay for tax cuts this year, it would further exacerbate the rise of interest owed on the debt.


Not addressing the long-term deficit for another decade, according to the CBO projections, would put the nation on a perilous course. Such a crisis, as it comes nearer, may be necessary for lawmakers to solve the problem.

If tax cuts are enacted this year, opportunities to cut your tax bill could save you a lot of money, but determining exactly how you might benefit will require reviewing your income, deductions, capital gains and losses when the final tax bill is passed.


We are financial professionals and we give you independent and authoritative analysis about managing your money.


To receive updates on tax tactics that can lower your tax bill, please subscribe to our e-mail newsletter.

CBO's 10-year and extended baselines generally reflect current law and are meant to serve as benchmarks for measuring the budgetary effects of proposed changes in federal revenues or spending. They are not meant to be predictions of future budgetary outcomes; rather, they represent CBO's best assessment of how the economy and other factors would affect revenues and spending if current law generally remained unchanged. 10-year Treasury bond yield assumptions: 2.7%, 3.6% 4.1% in 10-year increments through 2047.