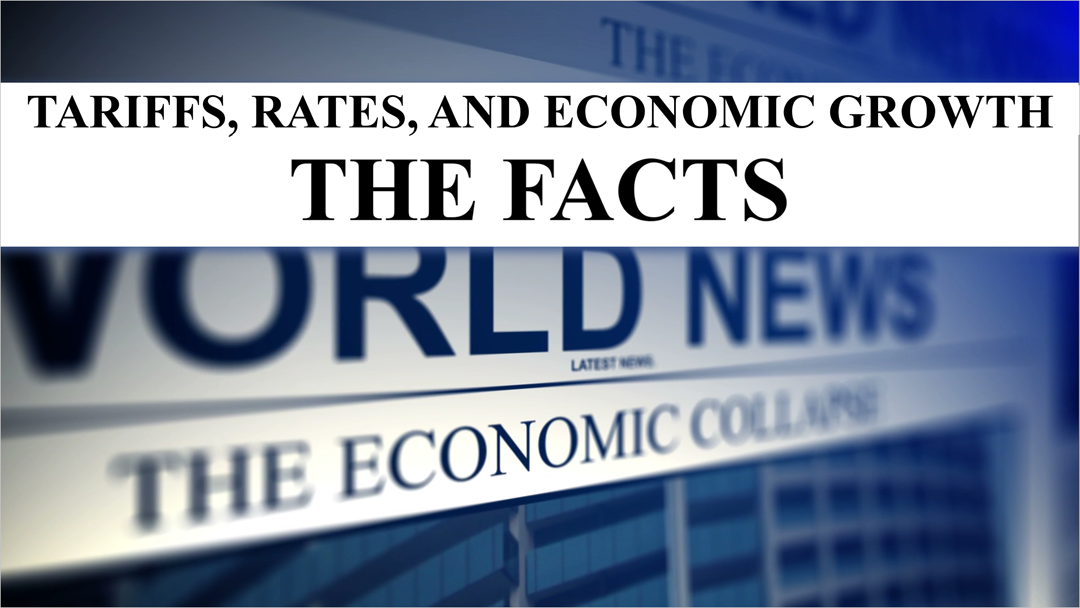 Tariffs, interest rates, and the economy's strength are triggering fear and market volatility. Here are the facts. 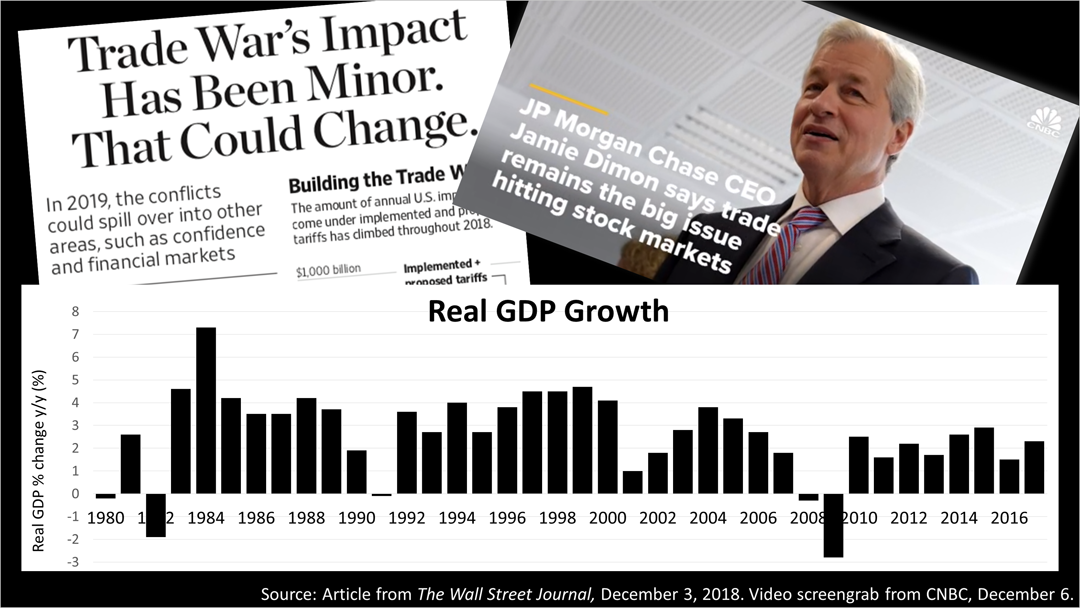 Fears of a trade war with China are all over financial cable TV news and even The Wall Street Journal headlines are sounding an alarm, implying it could become a major problem. But the facts indicate such fear is overdone.

In an October 8th column on this topic, Bob Davis in the WSJ quoted from a study by JP Morgan concluding that tariffs would reduce U.S. output growth by just one-tenth of 1% in 2018 and three-tenths of 1% in 2019. Assuming the worst fears about a trade war with China would be realized, resulting in a $125 billion tariff on $500 billion of imports on Chinese goods, the impact on the $20 trillion U.S. gross domestic product was miniscule.

In 1984, President Reagan imposed trade barriers on autos and steel, which amounted to 21% of total U.S. imports, and it was nonetheless a great year of U.S. economic growth. 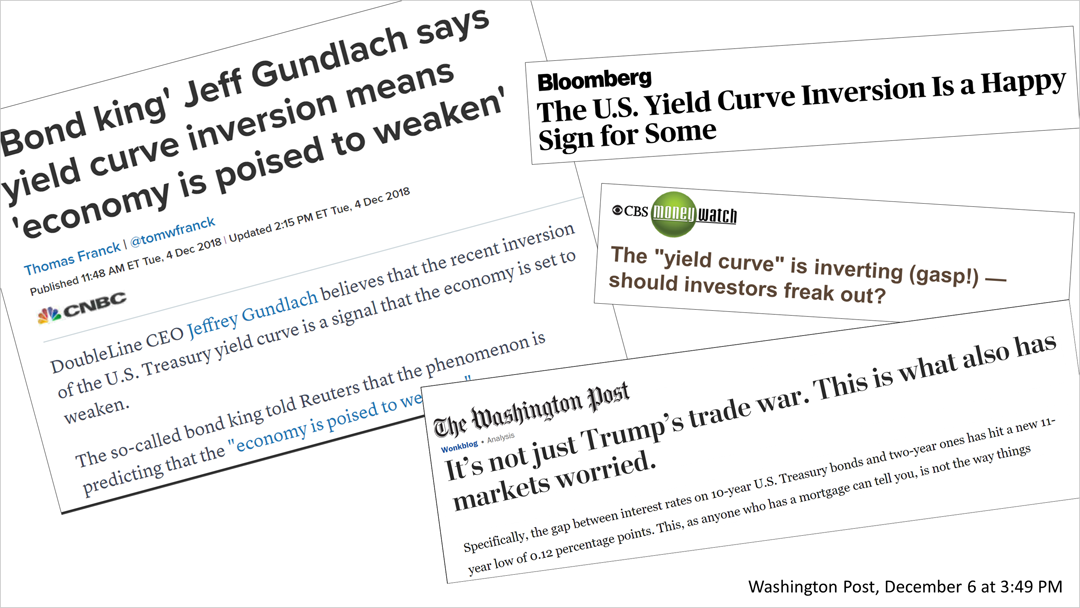 Similarly, fears about Fed policy on interest rates made for sensational headlines all week long, with major media outlets throughout the nation saying the yield had inverted and a recession was on the horizon. 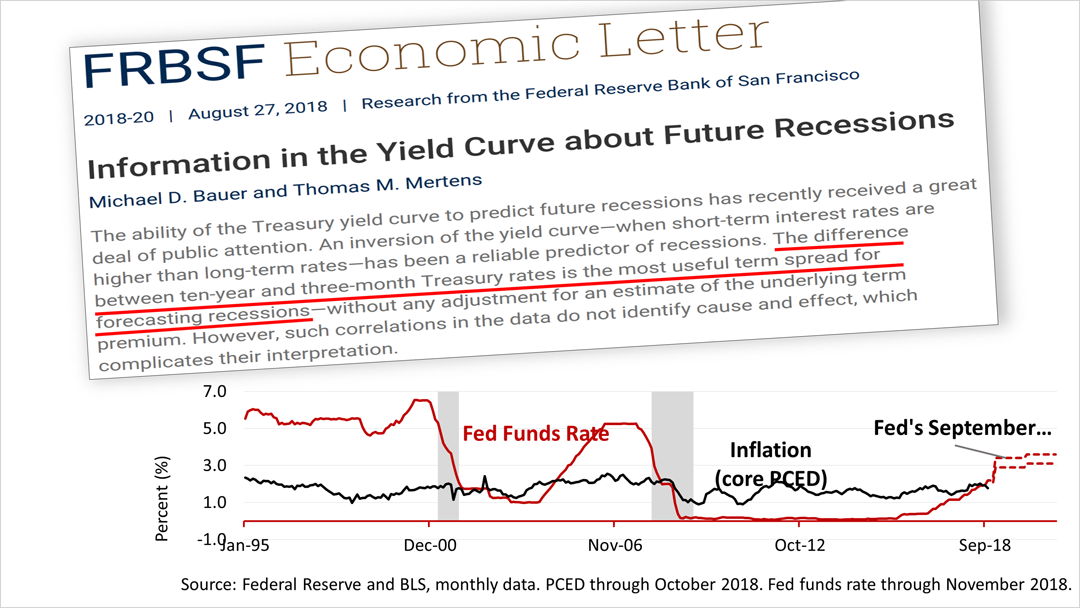 The facts are not that bad! The media generally seem eager to report bad news and moribund stories about fed policy causing an inversion of the yield curve are focused on the wrong yield curve. They're reporting on the differential between the U.S. Treasury 10 year-bond and the U.S. Treasury two-year note. That's the wrong yield curve to watch if you're trying to predict a recession. The yield curve differential that really matters is the 10-year Treasury versus the rate on the 30-day Treasury, the Fed funds rate!

The San Francisco District of the Federal Reserve, the central bankers that regulate interest rate policy, on August 27, 2018, in an Economic Letter, said "the most useful interest rate term spread for forecasting recessions is the 30-day Treasury Bill versus the 10-year Treasury." 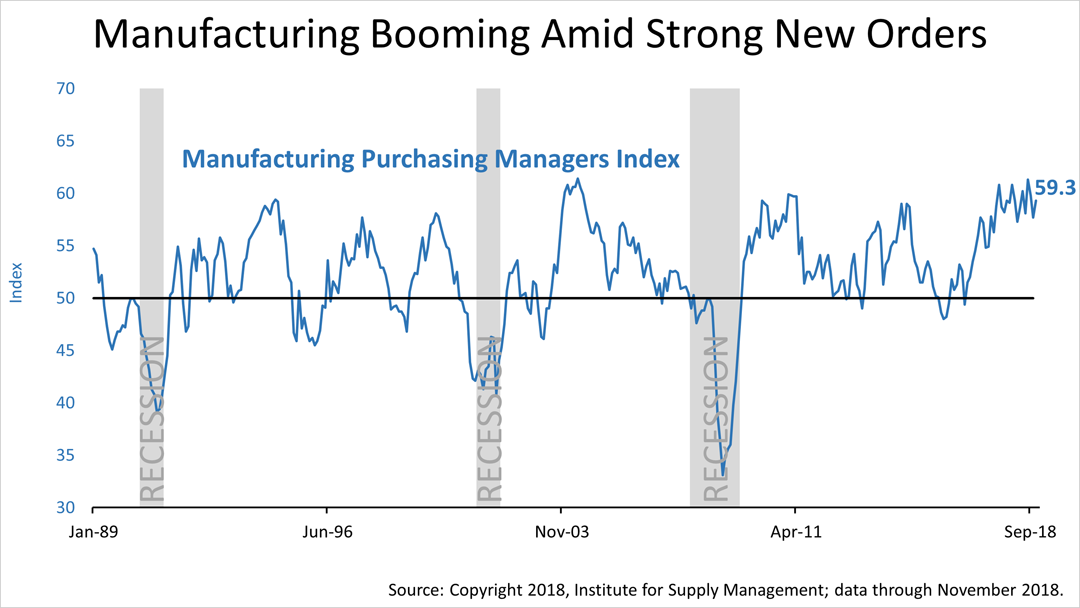 The new order's subcomponent jumped from October's 57.4 to 62.1. This is a forward-looking measure of manufacturing activity. By all measure, manufacturing is booming.

Before previous recessions, the Institute of Supply of Management's manufacturing index has definitively slumped to a reading under 50 before the economy slid into a recession. 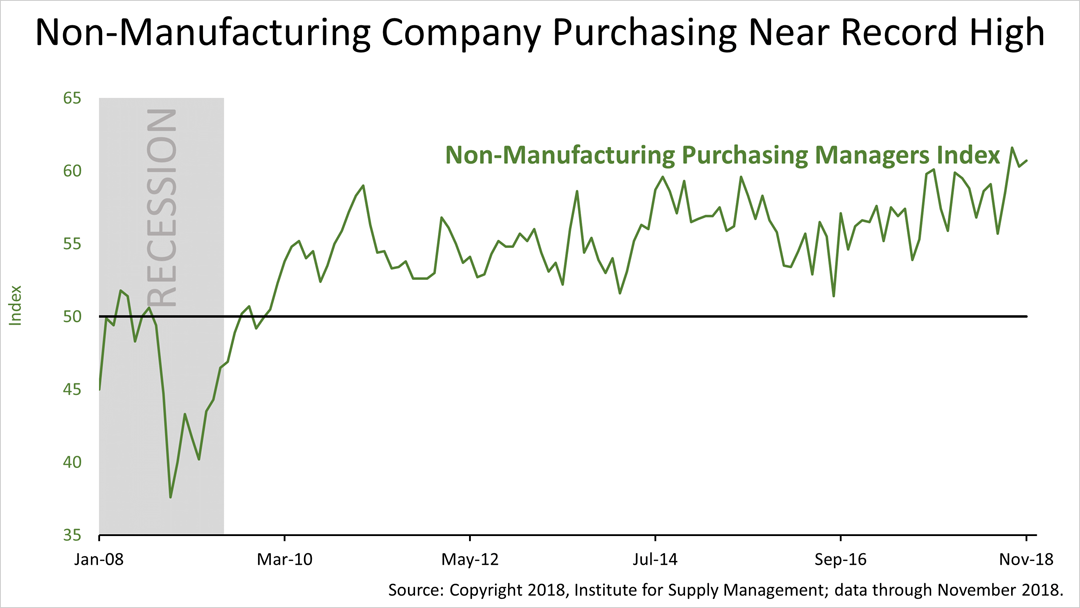 The ISM non-manufacturing index in November hit 60.7, ticking up from October's 60.3, and off only slightly from September's record 61.6.

November's new orders sub-index, while not shown here, rose to 62.5 from October's 61.5, and higher than September's blowout 61.6.

Non-manufacturing accounts for about 86% of U.S. economic activity, making this index an important barometer of economic strength. 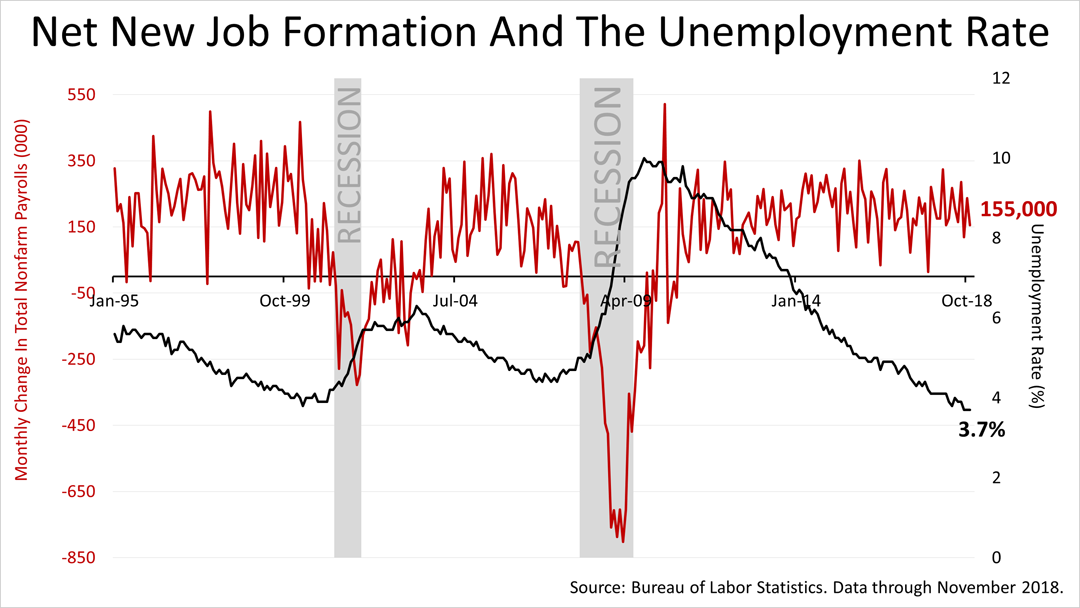 New job formation was slightly lower than expected on Friday but remained at a strong level. Unemployment stayed near a record low. 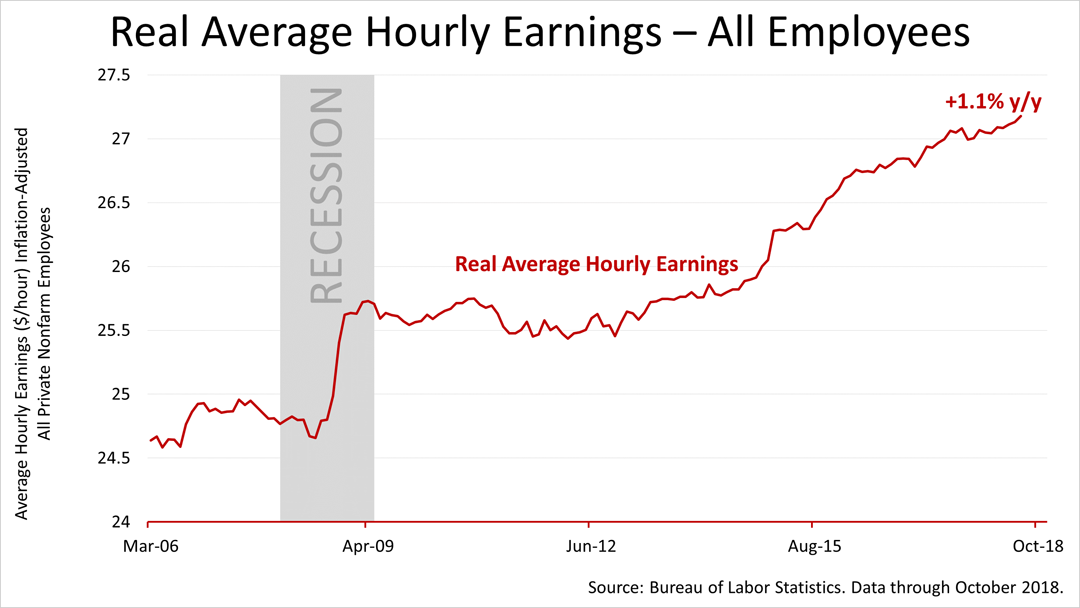 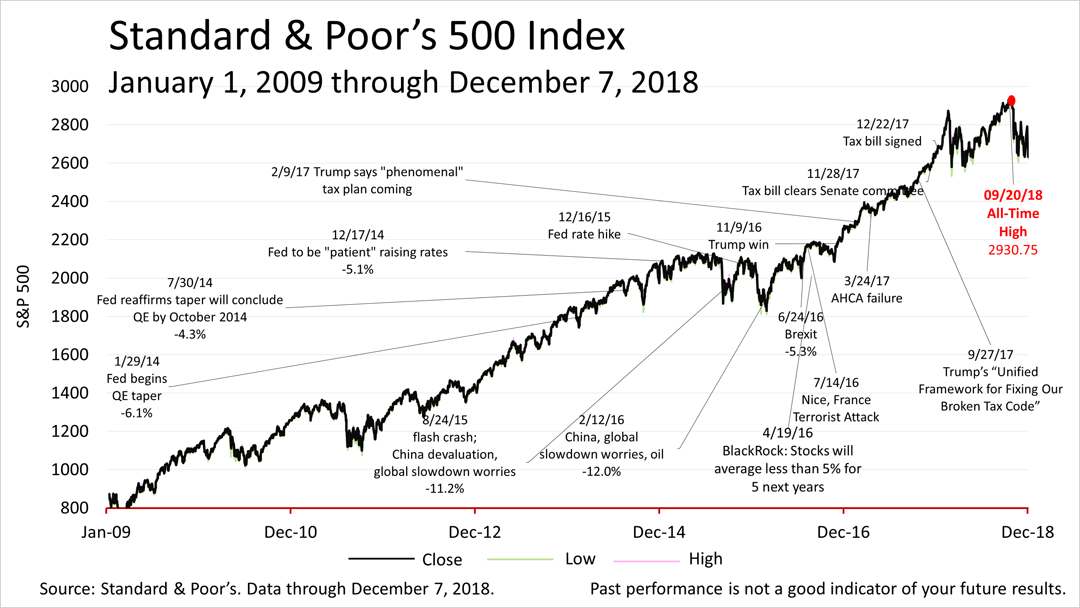