This Week’s Economic And Investment News

Here’s what happened in the economy this past week affecting investors: 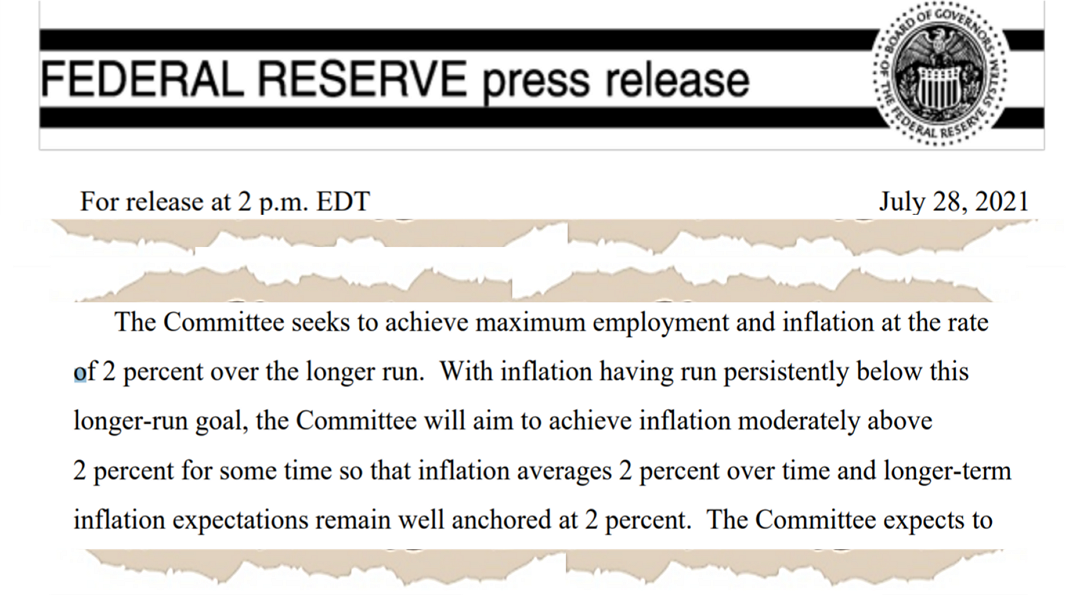 After the meeting by the Federal Reserve Board’s top policymaking committee on July 27 and July 28, the Fed issued a press release and used the same language as it has in the past regarding inflation. However, the language used in the Fed release about its policy of quantitative easing -- where it purchases long-term Treasury bonds and mortgage-backed bonds to add liquidity to the economy -- changed slightly. While the Fed had previously said it would continue the asset purchases until substantial progress had been made toward its goal of full employment and stable prices, the Fed statement now added that “the economy has made progress toward these.” This signals that the Fed might begin to taper back on QE purchases starting as early as September or October. 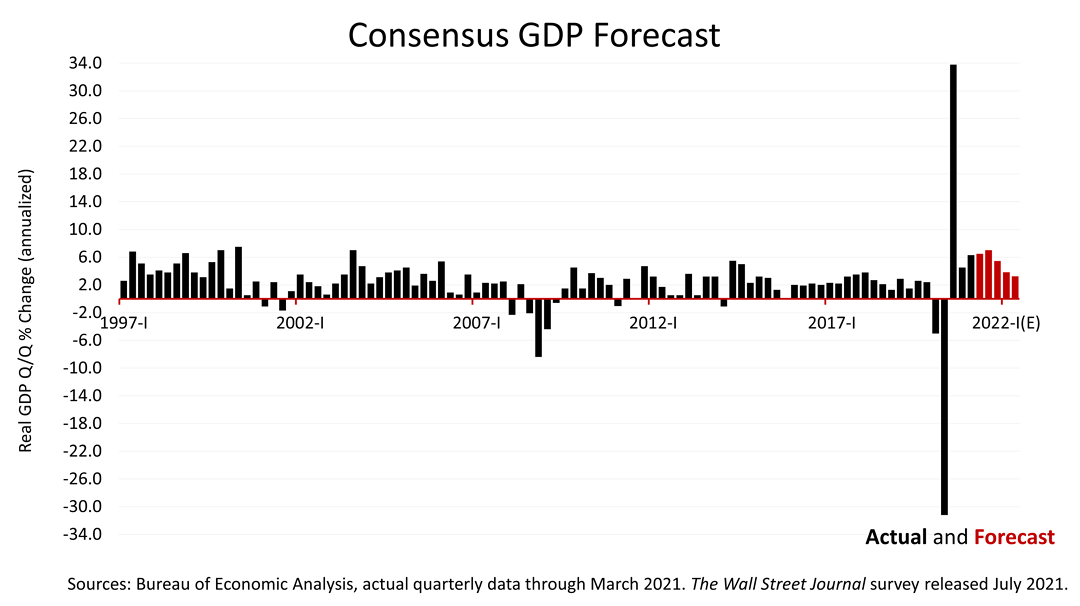 The economy grew at a 6.5% annual rate for the quarter ended June 30, according to the Bureau of Economic Analysis release yesterday. It was slightly lower than expected but much stronger than the quarterly rate before the Covid pandemic.

Meanwhile, the latest survey of 60 economists surveyed in early July shows the consensus forecast for the five quarters ahead (in red) shows that the experts expect above-normal growth to continue for the next two or three quarters. 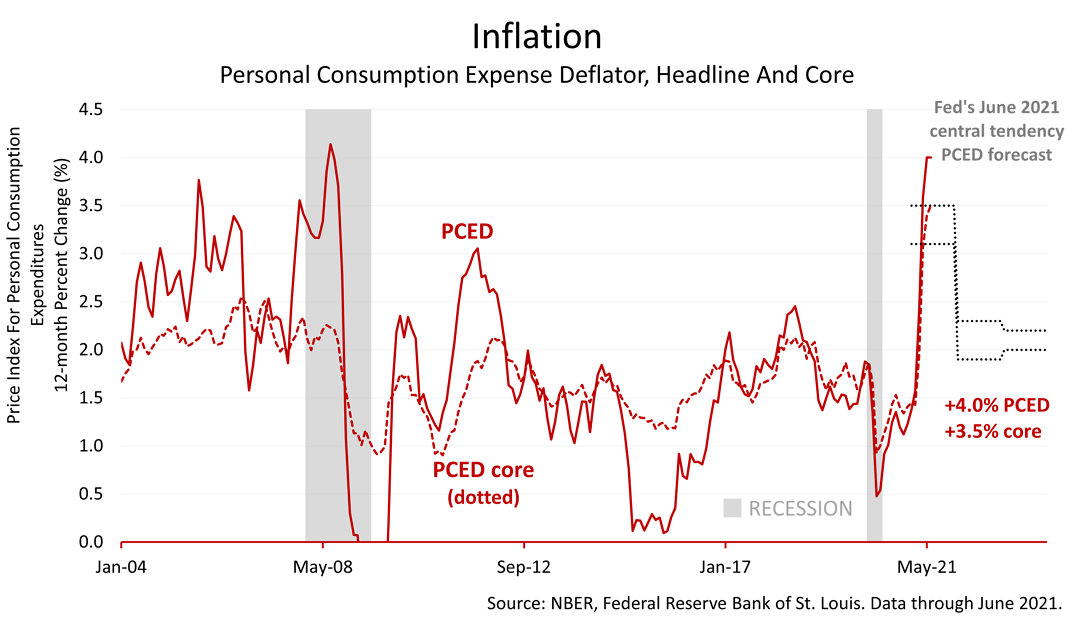 The inflation metric used by the Fed to set interest rates, the Personal Consumption Expenditure Deflator, was released today and it offered no big surprises. Yet it remains the biggest known risk to the financial economy.

The dotted lines on the right show the Fed is forecasting that inflation will plunge in January 2022, with the PCED landing between 1.9% and 2.3%, versus the current 4% rate. That is a drastic drop in inflation that the Fed expects to occur just six months from now. Whether the Fed is right will remain unknown until February 2022. 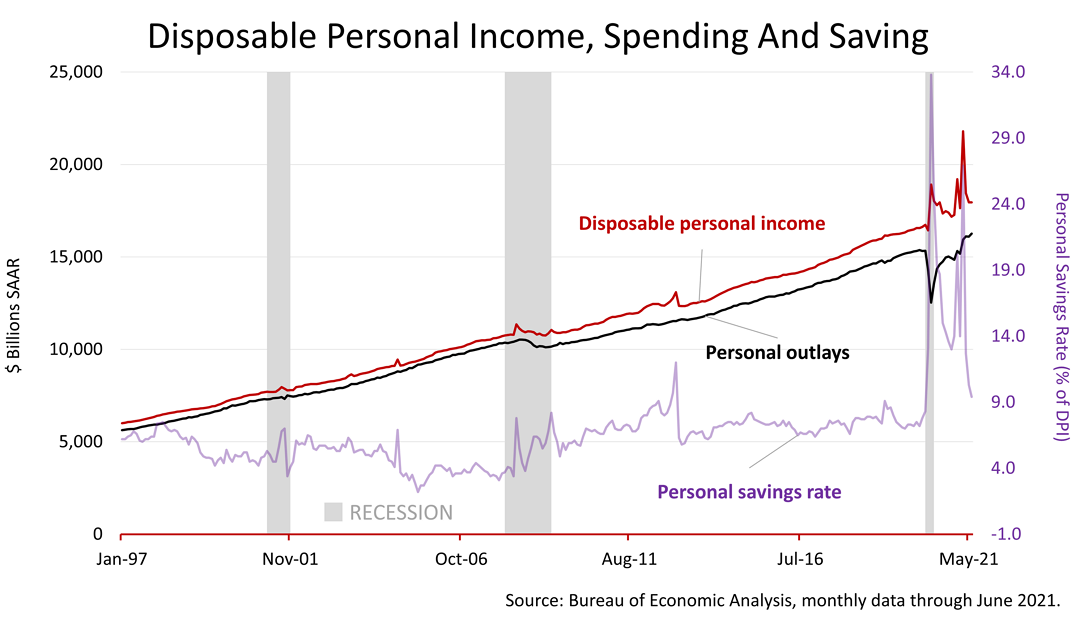 This morning’s data from the Bureau of Economic Analysis showed that the savings rate continued falling but remains elevated and is still strong relative to its historical norm. The savings rate spikes (in the purple line) occurred after a government stimulus of $5.3 trillion was enacted in response to the Covid pandemic.

Disposable personal income (DPI) remains elevated. DPI is about as high as it would have been if the pandemic never happened. Meanwhile, personal outlays ticked up last month, as consumers continued their spending spree. The unprecedented government payments have kept the American economy running like the pandemic never happened and the expansion that began in March 2009 and ended February 2020, never ended. Again, this is due to the unprecedented government reaction. 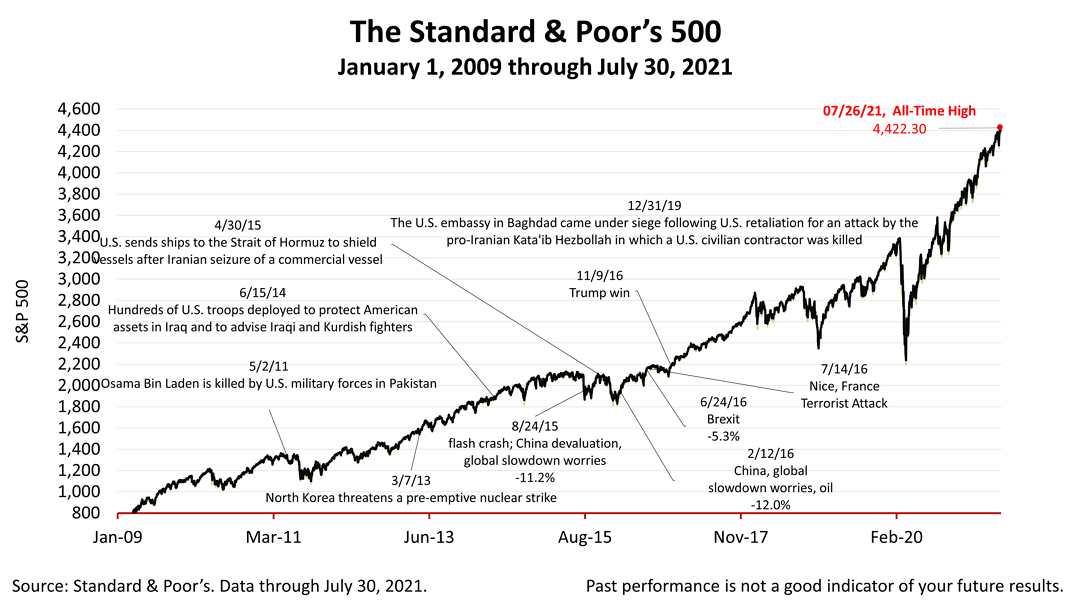 The Standard & Poor's 500 (S&P 500) is an unmanaged group of securities considered to be representative of the stock market in general. It is a market-value weighted index with each stock's weight proportionate to its market value. Index returns do not include fees or expenses. Investing involves risk, including the loss of principal, and past performance is no guarantee of future results. The investment return and principal value of an investment will fluctuate so that an investor's shares, when redeemed, may be worth more or less than their original cost. Current performance may be lower or higher than the performance quoted.   ​​​​​​​ ​​​​​​​​ Nothing contained herein is to be considered a solicitation, research material, an investment recommendation, or advice of any kind, and it is subject to change without notice. It does not take into account your investment objectives, financial situation, or particular needs. Product suitability must be independently determined for each individual investor.   ​​​​​​​​ ​​​​​​​​This material represents an assessment of the market and economic environment at a specific point in time and is not intended to be a forecast of future events or a guarantee of future results. Forward-looking statements are subject to certain risks and uncertainties. Actual results, performance, or achievements may differ materially from those expressed or implied. Information is based on data gathered from what we believe are reliable sources. It is not guaranteed as to accuracy, does not purport to be complete, and is not intended to be used as a primary basis for investment decisions. ​​​​​​​​    ​​​​