Stocks Surge 2% Friday But Why Are They So Volatile Lately? 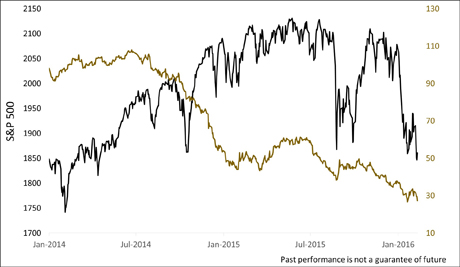 The Standard & Poor's 500 gained 2% on Friday, a big and much-welcomed surge after losses all week. The big gain was widely attributed to a jump in oil prices.

"A surge in oil prices helped put investors in a buying mood early on," the Associated Press reported Friday evening.

The sudden correlation of stocks and oil prices is remarkable for revealing just how irrational and emotional the stock market can be.


The chart above shows the relationship between crude oil and stock prices for the last two months. What happened to the black line from June 2014 to the end of 2015, as the brown line, representing the price of a barrel of West Texas Intermediate crude, collapsed from $107 to $44? Stocks soared!


Any rational person would conclude that when oil prices drop, stocks appreciate. However, look at what happened in recent months. Something has changed in the way oil prices have affected the stock market lately.


In late June 2015, oil prices started another swift descent, tumbling from $60 to less than $40 a barrel in six weeks. On August 24, 2015, the stock market experienced a "flash crash" and a long-awaited correction of about 11% occurred in a day. Since then, the stock market has declined as oil prices dipped lower.

While lower oil prices always have been thought to stimulate the economy - by freeing consumers to go out to eat more and buy more stuff instead of spending on gasoline - the stock market is behaving exactly the opposite way: Higher oil prices Friday was the major reason cited for causing the 2% gain in stocks .

Why is the stock market reacting so illogically? Why is there so much more volatility in stock prices? 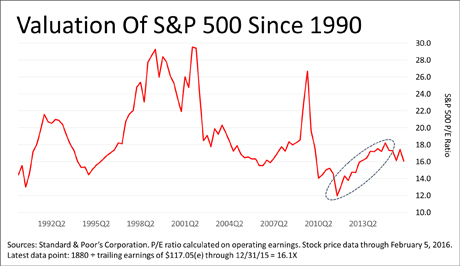 The answer is that the market is more susceptible to emotional swings because its valuation has recovered to a level in line with its historical norm. This chart shows the price-to-earnings ratio of the companies in the S&P 500 going to back to 1990.


The p-e ratio tells you how much investors are willing to pay for $1 of earnings. Look at how the period around the tech bubble, at the turn of the millennium, investors were willing to pay nearly $30 a share for every dollar of profit earned by a company in the S&P 500. Such extremes in stock valuations are signs of irrational exuberance.


Looking at the valuations placed on stocks over the entire 25-year period, from 1990 through the end of 2015, shows that investors have been willing to pay about $17 for every $1 earned by a company in the S&P 500. That market multiple of 17 is the average valuation placed on stocks by investors in a low-inflation environment, like we are currently experiencing.


Now, look at the period highlighted by the dotted circle. Investors went from market multiple of 12 in the third quarter of 2011 to 18 in the fourth quarter of 2014.


Currently, the market p-e ratio is about 16. While it's below the "normal" market multiple of 17, the higher valuation level makes the stock market more susceptible to emotional or even irrational drops. 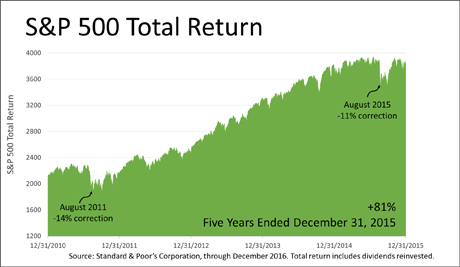 The expansion of the market multiple is what propelled stock prices over the bull-run that accompanied the recovery from The Great Recession. Stock prices enjoyed an uninterrupted four year bull run after August 2011 through August 2015. Lots of bad news occurred in that period, but stocks shook it off and climbed higher.


In the context of this huge long-term bull market and stocks recovering to a more normal valuation level, it make sense for stocks to pause. Although no one can predict stock performance, it is reasonable to expect sideways motion with continued volatility from stocks for now.