With Stocks Near All-Time High, Personal Income And Employment Data Are Released 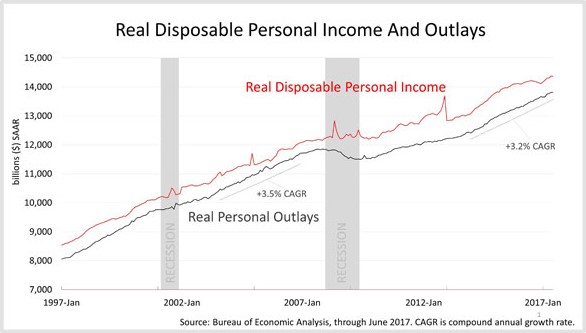 Real disposable personal income grew 2.8% in the 12 months ended June 30. That's the same rate as in the last economic expansion and is enough to fuel continued economic growth. 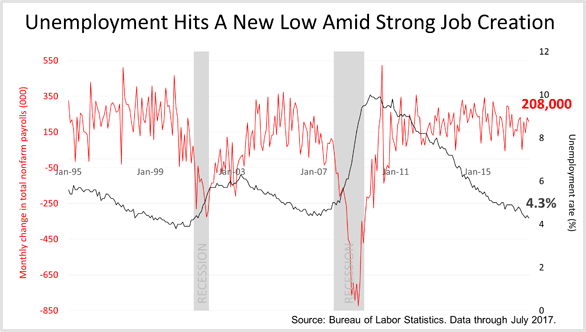 Meanwhile, the official unemployment rate declined to 4.3%. That's lower than the bottom of 4.4% in the rate of joblessness achieved in the last economic expansion in spring 2007.

Not since May 2001 has the unemployment rate been this low, and that was at the end of the longest expansion in modern U.S. history.

In addition, the economy has continued to create new jobs - 208,000 of them in June - which was above expectations.

New job creation and a decline in unemployment has been stretched out because the severity of The Great Recession caused more job losses than in past recessions.

The economy cannot keep producing new jobs the way it has in recent years because the U.S. is at full employment, or near it. When companies find that their new positions cannot be filled or take much longer to be filled, they continue to operate but with open positions. However, companies eventually are likely to stop creating new jobs when they cannot fill their current openings. This is likely to happen in the months ahead. 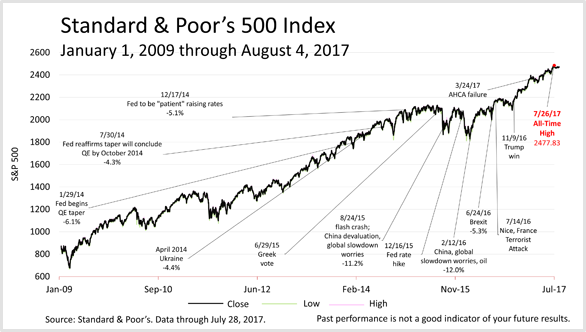 The Dow Jones Industrial Average closed above the 22,000 mark for the first time ever on Wednesday, August 2. The Standard & Poor's 500 index has repeatedly broken its all-time high for months and it closed the week fractionally lower than its all-time high.

At 98 months, the current expansion and bull market is the third-longest in modern U.S. history, and the good times could surpass the longest-ever U.S. expansion, the 120-month-long boom that spanned the entire decade of the 1990s and ended with the tech bubble of early 2000.

A bad surprise could turn sentiment abruptly, and a 10% or 15% price drop is possible any time. However, earnings on the Standard & Poor's are expected by Wall Street analysts to rise by 18% in 2017 and 12% in 2018 - far stronger than the long-term annual average rate of earnings growth of 7%, and the latest economic data released this past week bolstered expectations for continued economic growth, indicates, which drives corporate earnings, so the bull market could also go on for years.

Combined with the one-two punch of tax and financial planning, adhering to a discipline of broad diversification and strategic asset allocation in a low-cost core portfolio that is periodically rebalanced is a smart regimen to prepare for the best of times and worst.

We are independent financial professionals, communicating at a frequency attuned to you.

Get financial wisdom here anytime from your Smartphone, by subscribing to our e-mail newsletter.