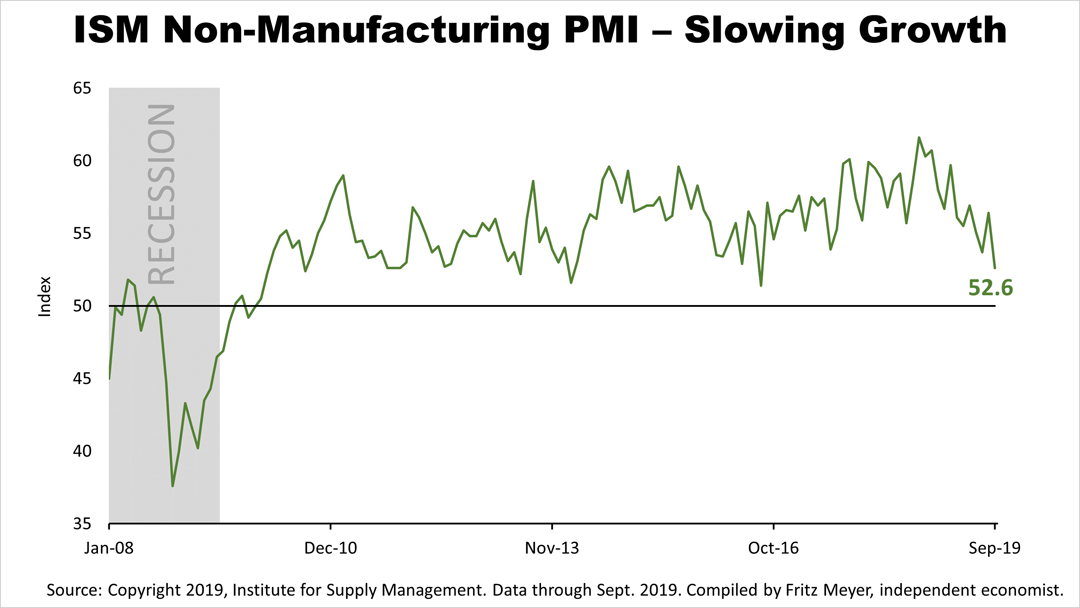 Friday's release of the Purchasing Managers Index (PMI), which measures activity in the 88% of the economy not in manufacturing, show a decline in September. The non-manufacturing PMI dropped to 52.6 from August's 56.4 and from July's 53.7 reading.

From its highest reading in a decade achieved last September, the non-manufacturing sector, also known as the service economy, dropped to a rate in line with its long-term norm. At 52.6, the service economy in September was growing in line with its rate over the past decade since this index's inception in January of 2008, according to data from the Institute of Supply Management (ISM), which maintains the index. While this index has only limited history, the ISM non-manufacturing PMI is designed to substantially slump when there's a reading of less than 50 percent months in advance of the onset of a recession.

Anthony Nieves, chair of the ISM's services survey committee, said he wasn't yet overly concerned about a pullback in the services sector because the index's August reading was relatively high, the jobs market remains solid and the American consumer is holding up well. "Next month, especially with the retail holiday season coming, my prediction is that we should see increases in the rate of growth [for services], provided there aren't more developments with the trade war," Mr. Nieves said. 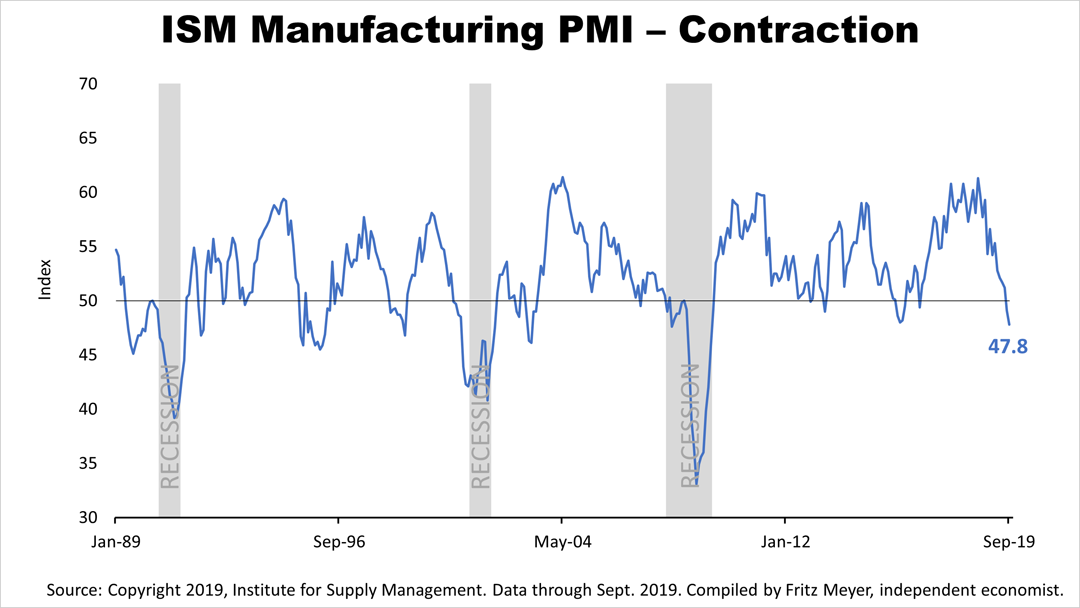 On Tuesday, the ISM's Manufacturing PMI was released and showed continued weakness. In September, it ticked down to 47.8 from 49.1 in August. The manufacturing economy accounts for just 12% of the U.S. economy and 10% of U.S. jobs. It could drop for months and manufacturing could remain in a recession for months without causing a recession in the economy. Although the ISM designed the index to predict a recession when it falls below 50 percent and plunges for months, it occasionally drops below 50 during an economic expansion, as happened in 1995, 1999, 2003, 2013 and 2016. The ISM says the current reading of 47.8 correlates with about a 1.5% economic growth rate for the United States. 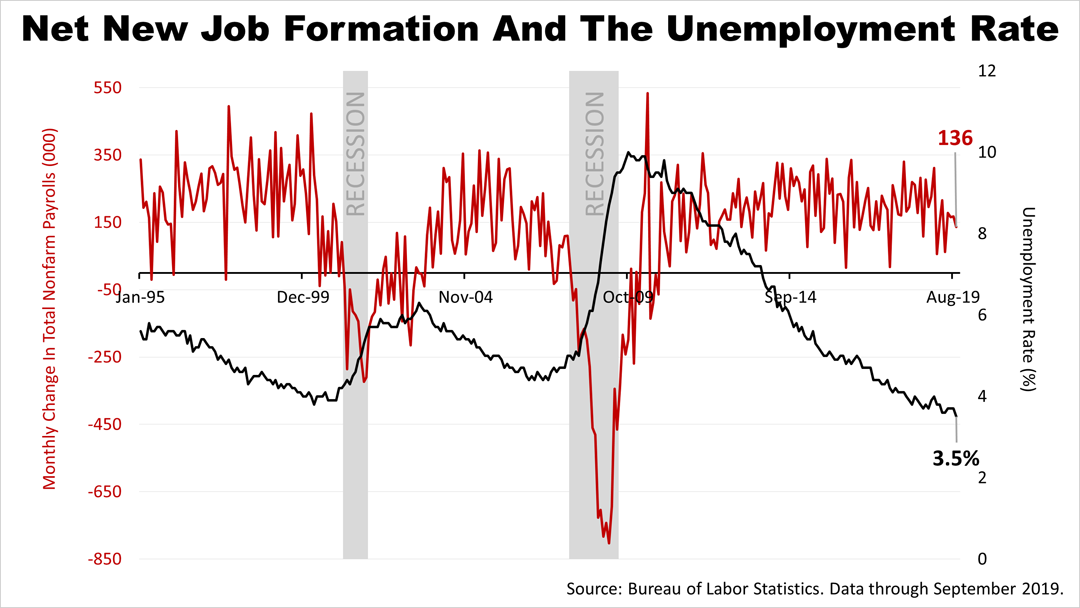 The federal government also released its monthly report on the employment situation. The economy added 136,000 net new jobs in September, about 10,000 fewer jobs than were expected. The unemployment rate in September ticked down to 3.5%, near the record low reached in December of 1969 of 3.4%.


From very strong job growth in 2018, new-job creation has been trending lower in 2019. While the drop is not good news, job growth would have to plunge to zero and drop lower for months for a recession to occur. 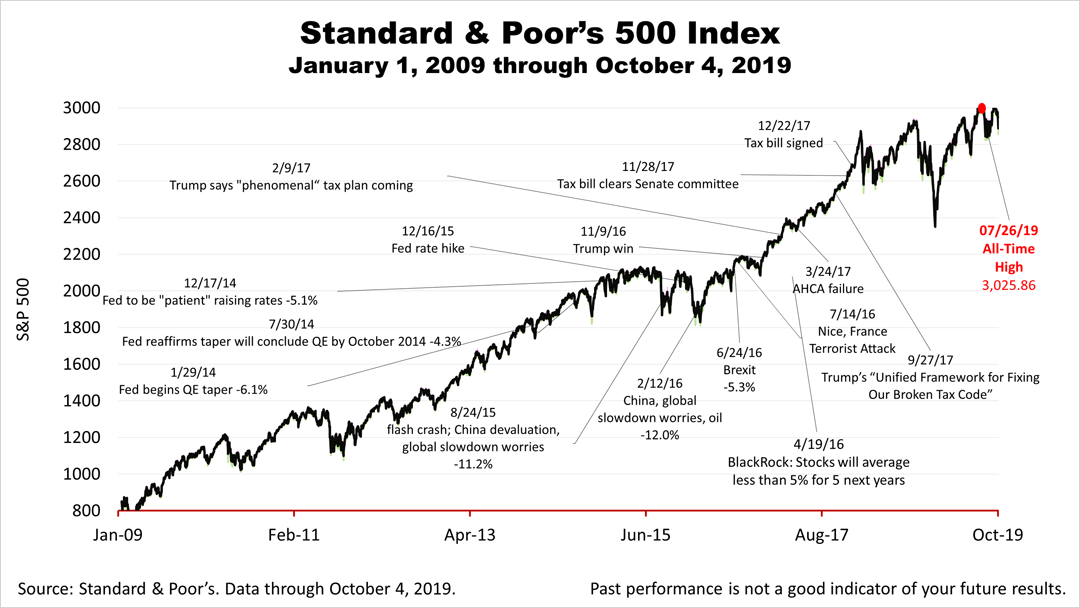 Though the stock market dropped sharply on recession fears after the manufacturing PMI was released on Tuesday, and fell again on Thursday, the S&P 500 rose 1.4% on Friday, closing at 2,952.01. The S&P 500 closed the week less than 3% from its all-time high.